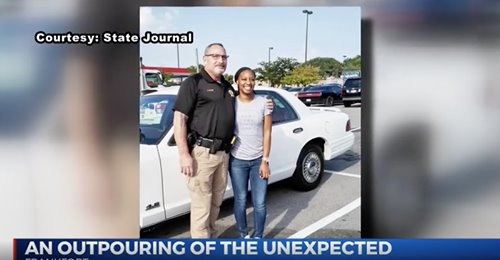 FRANKFORT, Ky. (WTVQ) — A Franklin County deputy and student resource officer gave a mother the surprise of a lifetime. By giving her a big gift, and something she says she needed more than anything at the time.  “I just really can’t do anything but thank the Lord for Officer Saunier because I’ve been through literally so much within the last couple of months,” says Vanee Coleman. Coleman has been down on her luck after her car broke down recently in her daughter’s school drop-off line. That’s where she met school resource Officer Joe Saunier. “He was generous enough to rush to my rescue to help me jump my battery for my car,” she says. But that was only the beginning of his care and kindness. First, he bought her a new battery and alternator but that didn’t fix the problem. In fact, it became clear, nothing was going to fix it. Its days were over.  “Definitely flabbergasted because I don’t know anybody that would just give anybody a vehicle,” says Coleman. Officer Saunier gave her a car. A 1995 Grand Marquis he had been fixing up. “It was just kind of sitting there not being used so I thought wait, they need it,” says Officer Joe Saunier. He surprised her at work. “He just gave me a car so I was trying to process what was going on because I was like okay I don’t know how to… just speechless,” says Coleman. “She just couldn’t believe it at first and I think she still can’t. I think she’s just still kind a like did this happen but it really did,” says Saunier. Officer Saunier knows first-hand the difference people can make in others’ lives because when he needed help years ago with his son Ryan who had Cystic Fibrosis, support from the community poured in. He lost his son in 2005. “Now that we can give back we do. It’s just kind of become a thing it’s like therapy for me. Gets me through what all I’ve seen over the years,” says Saunier. “I’m just helping out. Just helping somebody who needed help. And in return one day they may turn around and do the same thing,” he says. And that’s his hope, by paying it forward, others will do the same. “So I look forward to a day when I can be able to bless somebody like that in need. So yeah,” says Coleman. There is a joy in Joe Saunier and Vanee Coleman that even circumstances can’t steal.

Learn More: An outpouring of the unexpected – WTVQ