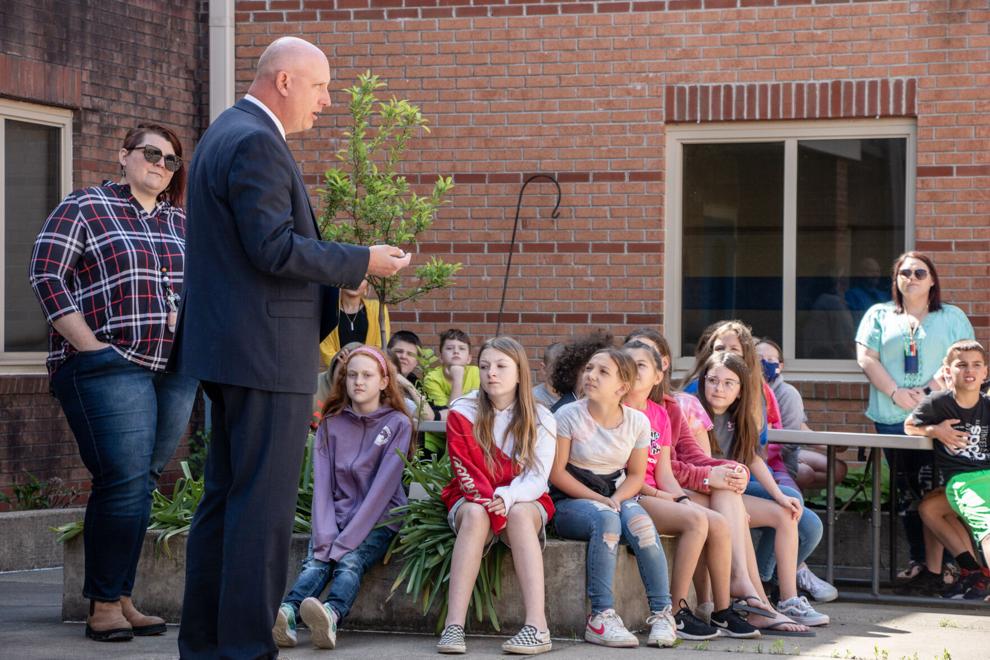 Ben Wilcox, Kentucky School Security Marshal, shared with the fourth-graders at Summit Elementary about the importance of their action in Ohio as well as continually learning how to be a safe and good person. Photos by EMILY PORTER | The Daily Independent

From The Daily Independent

Summit fourth-graders were recognized for their response during a scary situation on a field trip in Ohio.

The students and teachers had pooled money and raised funds for a trip to the Columbus Zoo and Aquarium. The trip was set for Friday, April 15. Fourth-grade teacher Emmalyn Edmonds said the zoo staff told her it was the busiest day of the year with 10,000 guests.

What should have been a happy day to remember turned scary quickly.

10TV news in Columbus reported that a traffic crash occurred on Ohio St. Rt. 750 in front of the zoo. Local police responded to assist and direct traffic. A man driving a Jeep did not follow officer’s direction and drove quickly into the zoo’s parking lot. The officer pursued, according to 10 TV.

The man jumped out of the vehicle and began to run. The officer drew his weapon and TASED the man from Pataskala, Ohio. He was arrested on scene. The local sheriff’s office confirmed to 10TV that the man was unarmed.

However, inside the zoo, all this information was not fully known as the events unfolded.

The zoo called for a lockdown “and somehow the words ‘active shooter’ got thrown into the mix,” said Tim Renfroe, School Resource Officer for Summit Elementary.

Courtney Newman, a fourth-grade assistant, recalled hearing those words and the moments that followed. Newman was with students in the aquarium and they were ready to head the Africa exhibit when she began to hear rumbles of “gun” and “active shooter.”

Newman approached a zoo employee and asked for her to confirm that was what they believed to be happening. They said they were checking into it.

Then Newman heard the dreaded words no teacher ever wants to hear: “confirmed active shooter.”

Newman said there was chaos, and people were running.

“You could hear them before you could see them,” she recalled.

She grabbed all of her students and they took off. Her group barricaded themselves in a bathroom.

As she was running, Newman dialed Principal Sean Stewart who was still in Boyd County.

“They called me and said, ‘we’ve got an active shooter situation,’” Stewart recalled. “Your stomach automatically drops … it was horrifying.”

Stewart contacted as many of the teachers as he could. Newman said Stewart told her to get on the Remind app to keep everyone updated. They continually counted to make sure they had all of their students.

The teachers and chaperones were keeping in touch via cell phone. Some groups were hidden in bathrooms, others in restaurants or gift shops, said Stewart.

The situation led to what Stewart called “mass hysteria.” However, the Summit Elementary fourth-grade class and their teachers were “fast-acting,” said Stewart.

Newman said the students with her were telling the family barricaded in the bathroom with them to get up on the toilet so their feet weren’t visible, and to stay quiet.

Others grabbed families still sitting on benches who didn’t know what was happening, and pulled them to safety.

In the midst of chaos and fear, the fourth-graders honed in on their training, got to safety, and helped others along they way.

“As principal, you hope that they’re never in that situation, but knowing they do have that training, and that they did react the way they did, it’s comforting to know that they do know how to be safe, or at least as safe as possible in that sort of situation,” said Stewart.

Newman said Stewart was the voice of calm and reason on the phone throughout the experience.

After about 15 minutes held-up in the bathroom, Newman was given an all-clear. From there, it was gathering the groups, and getting back to Kentucky as soon as possible, she said.

Many of the students handled the situation well. Some understandably boiled over with emotion.

Stewart recalled the sounds of students crying in the background of the phone calls. As he shares the memory, his voice cracks a little, and he is visibly a bit emotional.

“It’s things you never want to hear again, said Stewart. “It was terrifying. It was scary. I was stranded here … it was awful.”

Newman had three students right by her who she said where “bawling their eyes out.” She said she kept telling them everything was OK, that they did a good job, a fantastic job. She thanked them for their actions.

“All you can do is hold them at that point and calm them down and say ‘we’re safe now,’” said Newman.

When they came back to school, some wanted to talk about it, so they did. They addressed what happened and let the students process, said Newman.

“This is a part of their life now,” said Newman.

Once they boarded the bus, they asked for pizza. So, Officer Renfroe brought in pizza and pop Friday. He wanted to do something to make up for the ruined trip.

With the treats, he brought in three state-level safety officer. Ben Wilcox, the Kentucky School Security Marshal along with Steve Moore and Samuel Little.

Wilcox thanked the students for their response and shared about the importance of safety in school and out. He presented Stewart and the fourth-grade teachers with a certificate of recognition.

“You’ve made a promise to be safe and to keep other people safe, and I want to applaud you for that,” said Wilcox. He told the students how proud he was of them.