Todd Brendel finds that he is a more effective School Resource Officer by being actively involved with student organizations and school events. A law enforcement officer since 1990, his background as a DARE officer led to his interest in the SRO officer position established by the Erlanger Police Department in 1999. Since that time, he has been assigned to Tichenor Middle School in the Erlanger-Elsmere Independent school district which is located in Kenton County. 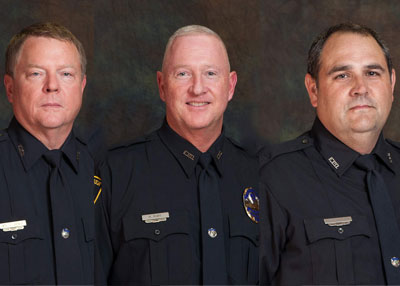 About the Erlanger SRO Program

Lucy Riffle, principal of the Middle School, thinks that administrators play an important role in insuring the success of the program “by making SROs members of the school’s leadership team. If SROs remain isolated from the school community, they cannot be near as effective.” Ms. Riffle has experienced first hand the benefits of having a SRO as “students are more likely to approach Officer Brendel rather than school administrators with problems, issues or suggestions. Todd shares those with us and we are able to address some of the problems before they become serious.” The city of Erlanger also recognizes the value of the program and assumed funding for the program once a COPS grant expired. The police department also operates an Adopt a School program in which officers stop by an assigned school during their shift, indicating the strong partnership between the agency and the school district.

Officer Brendel was the first SRO in the state to take advantage of the Sprint’s company offer to furnish cell phones to law enforcement officers in schools. The purpose of the program, referred to as the “Phone Call for Safety Hot Line”, was to allow parents, students, and community members to call the officers and report suspected criminal activity in the schools and neighborhood. Officer Brendel helped the company design posters publicizing the program that listed phone numbers the public could access 24 hours a day, 7 days a week to contact him or Mark Jolly, the district’s other SRO. At the beginning of each school year, the students are made aware of the program as well as issued wallet size cards with the phone numbers that they can carry with them. The officer finds that both students and parents also use the phones to discuss problems with the officers.

With the help of Darrell Cammack and other faculty members, Officer Brendel helped establish the first Youth Crime Watch program in Kentucky. Approximately 100 students participate in the program and activities include a student patrol in which students with walkie talkies patrol the interior and exterior of the school to watch for altercations, vandalism, and any unusual activities. They use two-way radios to report any significant incidents to the SRO and complete “Youth Patrol Investigation Forms” which are handed in at the end of their patrol. The patrols reinforce the idea that students play an important role in maintaining safe schools.

The Youth Crime Watch program also operates a crossing guard program and a community service program in which students help clean up parks and homes for the elderly and distribute donated toys to children in hospitals. Participants hold fund raisers throughout the year to pay for the special activities, patrol equipment and uniforms, and to send a delegation to the national conference. The club also receives support from 25 local businesses, which display donated posters stating, “This Business Supports Youth Crime Watch at Tichenor Middle School”. A job shadowing program allows students to take day-long field trips to businesses to observe the duties the employees perform.

Principal Riffle and Officer Brendel have noticed that vandalism, fights and after-school mischief have decreased since initiation of the program and the crossing guard program has resulted in slower traffic in front of the school.

Although he teaches DARE at the elementary schools one day each week, Officer Brendel spends the remaining four days at the middle school which allows him to form strong relationships with faculty, administrators and students. He frequently makes presentations in the classroom on topics such as bike safety and legal issues such as search and seizure and also organizes mock jury trials.

Other activities in which Officer Brendel is involved include the Special Olympics, field trips to space camp and sporting events. Participation in school events reaps rewards in terms of developing strong relationships with students according to Officer Brendel, “If you get involved, students know that you care. They need to get to know you as a person and learn that you are there to assist them.”

Todd Brendel is a member of the national faculty with Youth Crime Watch and is on probationary status with the National School Resource Officer Association as a certified instructor.