The Clay County school system has four School Resource Officers (SROs) assigned to its elementary, middle and high schools. A COPS grant funds two officer positions and Title IV and Safe School are used to pay for the other two after the termination of a COPS grant. The program was initiated in 1999, and while some community members were initially skeptical about the program, the SROs program now has the strong support of school officials, students and parents. 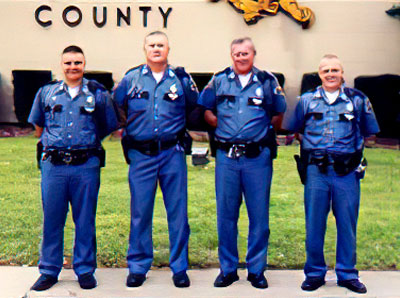 About the Clay County SRO Program

Each of the officers has previous law enforcement experience; a qualification that they think is particularly important as many of the situations in which they are involved require individual judgment and discretion. In addition, they feel that it is important that officers have a sense of humor in order to work effectively with students. The officers talk to students about their hobbies, interests, and families so that the youth can get to know them as individuals, not just law enforcement officers.

As is often the case with many new SRO programs, the duties of the officers were not well defined the first year of operation. The officers mainly made themselves visible at the school, spending time in the hallways, lunch rooms, and other spaces where students gathered. One of the first goals of the officers was to reduce the number of fights and disorderly conduct incidents. The second year, their roles expanded as principals increasingly called upon them for advice and they began going to classrooms to make presentations. In addition, they perform monthly safety inspections at each school. They frequently meet with parents, sit in on ARC meetings, accompany students on senior trips and other extracurricular activities as well as provide advice to school staff. Currently, they play an important role with CATS testing, going to every fifth grade class and talking about issues related to the practical living core content.

Tommy Jordan, the first SRO hired by the district, is a retired Kentucky State trooper. He thinks that it is important for SROs to get involved with parents. In fact, he frequently informs parents that since his job is to insure school safety, he works for them as well as for school officials. It is not unusual for parents to call him at home to talk or seek advice.

One of the most significant contributions of the SROs was completion of a critical incident planning document three years ago. It was a collaborative efforts with police chiefs, fire and emergency department personnel and school officials. The plan, which includes drawings of each school, outlines actions to be taken and assigns responsibilities for each task, and includes a plan to deal with the media. Practice drills are held at the schools once or twice a year and include representatives of all of the parties involved.

The officers agree that the duties of an SRO are significantly different than those of a regular patrol officers and, in fact, more rewarding. As patrol officers, they are used to reacting to an event that has already taken place; they make an arrest and take someone into custody. As an SRO, they have the opportunity to prevent law violations through the relationships they develop with students.

The officers agree that their involvement with students with learning disabilities requires special consideration. They frequently call upon the special education coordinator to learn more about the individual student so that their interventions can be more effective. They cite the need to react more cautiously and use discretion in enforcing policies.

The school system maintains a 911 hotline and the officers have obtained valuable information from the calls that helps the local law enforcement agency solve crimes in the community. As a result of the information gained through their interaction with students, the officers are responsible for approximately 75% of the local law enforcement agency’s cases. Many of the cases involves drug sales by adults in the community.

Dr. Deann Stivers Allen who played a critical role in getting the SRO started, says “The School Resource Officer program is just one critical element in ensuring student achievement and success in Clay County. Neither students can learn or teachers teach if the members of the educational community do not feel safe. Continually addressing both the perception of safety and the reality of safety is a driving force of the SRO program. Additionally, the SROs’ expertise in certain areas of the Core Content has provided teachers a resource for delivery and reinforcement of these concepts.”